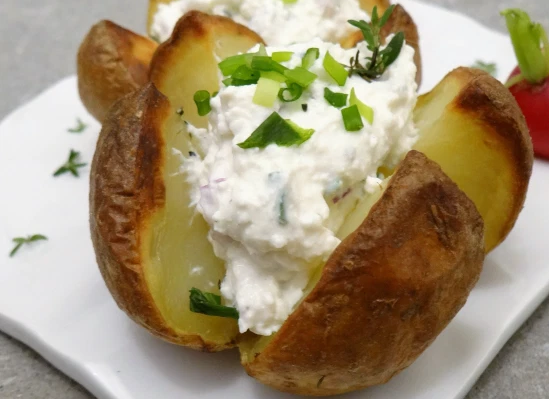 Nearly everybody knows the most famous Polish dish called Pierogi.

But the Polish cuisine is much more vibrant than one may think. One of its subsections is the regional cuisine of the Greater Poland voivodship. The cuisine of this region became distinct only in the XIX century when potatoes became a prevalent element of people’s diet. Their vernacular name is pyry (“tater”). This matter of affairs contributed to one of the most recognizable dishes in Poznań nowadays, namely, pyry z gzikiem. The dish is composed of jacket potatoes and specifically prepared curd cheese.

Yet another traditional dish that can be found in this region is a soup called Ślepe ryby (“Blind fish”), sometimes also with roux – z myrdyrdą. It has nothing to do with fish, in fact, it is a potato soup made out of the vegetable broth. It was popular for people of lower socioeconomic classes who could not afford meat for a broth.

Another traditional soup is called parzybroda or fuzlapy. It’s rich and easy to make. Its main ingredients are spring savoy cabbage, potatoes, mushrooms, mirepoix, and spices.

Talking about soups, it is necessary to mention czernina. The soup has quite a dark color due to the combination of duck and goose giblet broth, blood, and vinegar. It was usually served with prunes, thus it has a sweet-and-sour taste.

Since potatoes played such an important role in the development of the Greater Poland cuisine, it comes as no surprise that a regional variant of potato dumplings emerged, called szagówki aa well as a type of potato pancakes – plyndze, served with sour cream and sugar.

A representative main course in the Greater Poland region is a duck roasted with apples and spices. The dish is usually served with modra kapusta – a type of cabbage.

An essential element of all cuisines is a dessert. In Greater Poland, the most important one is Rogal świętomarciński (St. Martin’s croissant). It is a croissant with filling made out of white poppy-seed, nuts, raisins, and candied fruits. The name was entered in the register of protected designations of origins and continues to be a distinguishing mark of Poznań.
It is worth visiting Poznań as well as the Greater Poland voivodship not only to see a myriad of beautiful places but also to taste all these delicious dishes. They can be found in the majority of restaurants since they constitute a huge part of the culture and regional heritage. It is just tasty and entertaining, so what more can you ask for!

Next article Rosalía de Castro, from Galician writer to star in the sky