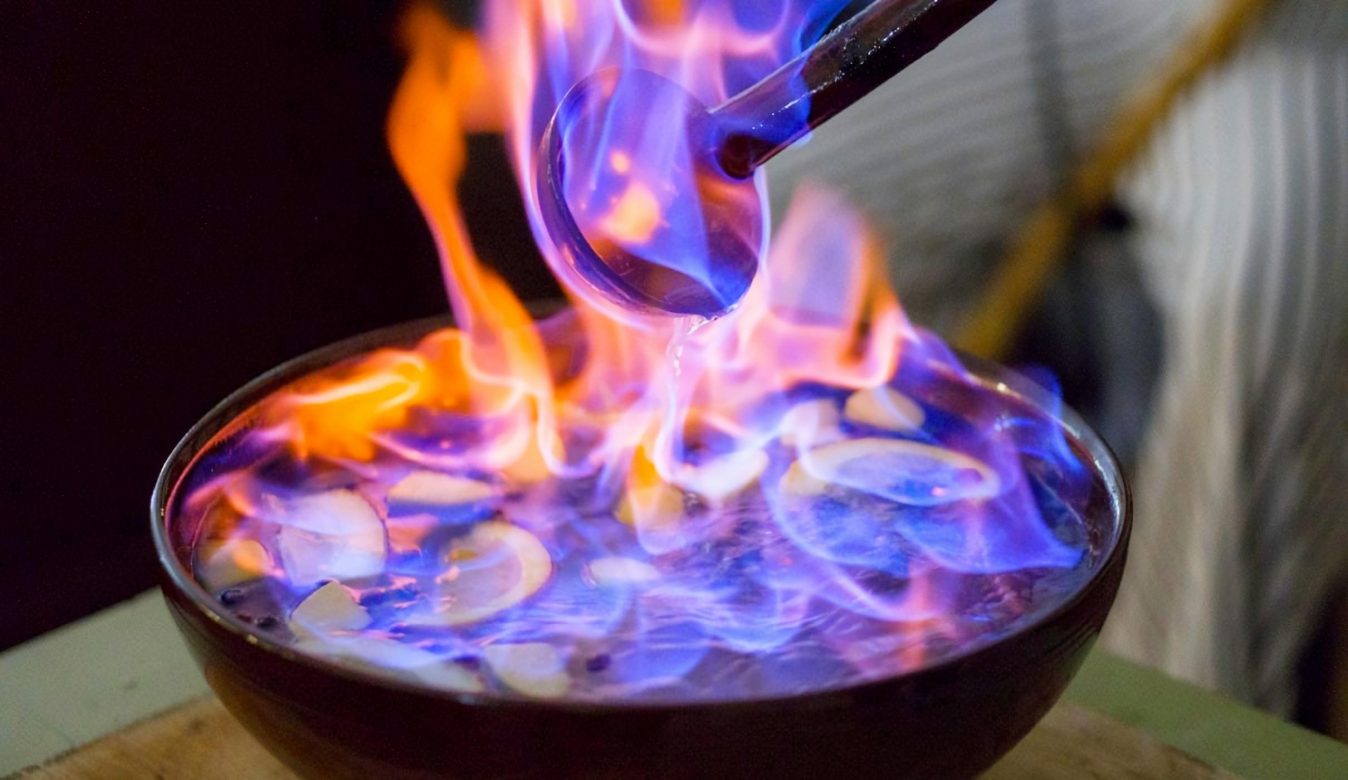 When we talk about Queimada, everyone thinks of Galicia and this typical Galician drink. In previous articles we have talked about traditions and superstitions of Galicia, especially about the night of Saint John, a magical night for all Galician. Today we are going to talk about the queimada in this article, a typical Galician drink, which is taken in many celebrations in the region, including during the night of Saint John.

The origin of this concoction is attributed to the Celtic culture. It is said that it was the ancestral “Castro” cultures who left us the queimada as an inheritance. Traditionally, the ritual of the queimada sought the purification of the body and the salvation of the soul, as well as scare away evil spirits and attract the good ones. Currently, the process is accompanied by reciting the famous “conxuro” spell, although it was created at a later time. Below you can find the English translation of the Galician “conxuro” and a photo of the original version in Galician:

demons, goblins and devils, spirits of the misty valleys,

crows, salamanders and witches, spells of the healers,

rotten leaky tree trunk, the home of worms and pests,

cauldron of the Company of Saints, the evil eye, black spells, the putrid smell of the dead, thunder and lightning.

The howl of the dog brings death, the neb of the satire and the rabbit´’s foot,

sinful tongue of the bad woman married to the old man,

hell of Satan and Beelzebub, fire of the burnt bodies, mutilated bodies of indecent people, farts of the vile bottom, the roar of the wild sea.

The useless womb of the single woman, the cry of the male cats for the fertile females, the foul placenta of a stillborn goat.

With this ladle we lift the flames of the fire that are like the flames of hell. The witches flee on their broomsticks and go to swim at the beach of the coarse sands.

Listen! Listen! to the roar they give. When they cannot stop burning in the liqueur they become purified and when this potion goes down our throats our souls become free of bad things and of all spells.

Forces of the air, earth, sea and fire to you I ask:

“If it´s true that you have more power than the humans,

The queimada is made up of the three basic elements that a person needs to live, elements of earth, water and fire, represented by the Celtic Trisquel. We have these elements in the queimada with the “moonshine”, the coffee beans, the lemon or the orange, the sugar and finally the fire. All this must be constantly stirred in an earthenware container until these elements are mixed together, thus evaporating the alcohol. Once evaporated, the queimada would be ready to serve in the traditional earthenware glasses.

Next article STANISŁAW BARAŃCZAK – THE CENSORED POET FROM POZNAŃ, WHOSE POEMS YOU CAN FIND ON CITY MURALS TODAY