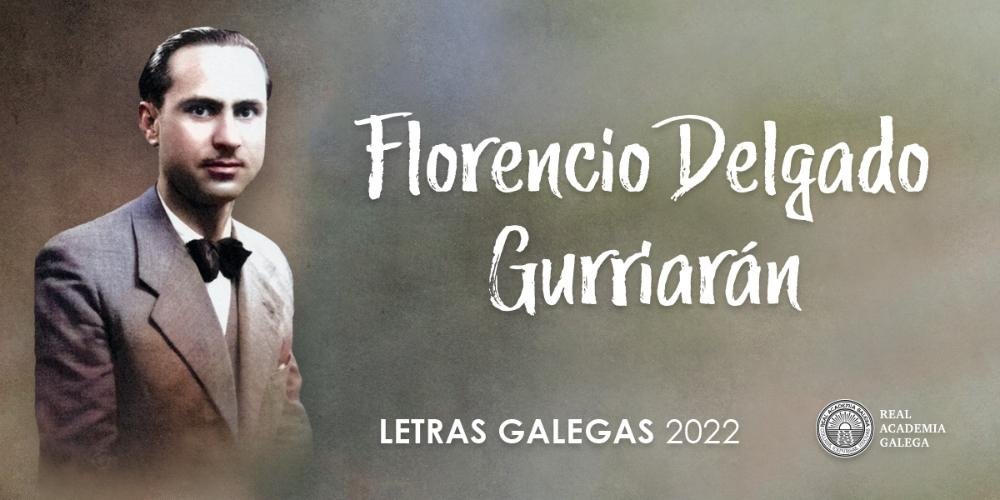 As we have said in previous publications, May 17th is the day we celebrate Galician Literature Day. This celebration began on May 17th, 1963, coinciding with the centenary of the publication of Cantares Gallegos, in which each year the 17th May is dedicated to a writer in the Galician language. It is a tribute to the Galician literary creation and for the defence of the Galician language. This day was chosen because on May 17th, 1963, it was 100 years since Rosalía de Castro had published Cantares Gallegos, the first literary work written in Galician that represents the starting point of the period called Galician Revival, after the Dark Centuries.

This year, the Galician Literature Day is dedicated to Florencio Delgado, who was born in Córgomo, near Ourense. When he was six years old he moved to Ourense and later to Palencia, where he studied at a secondary school. Between 1914 and 1924 he studied Law in Valladolid. Back in Córgomo (Ourense), he worked in a law firm in Valdeorras and became a member of the Seminar of Galician Studies.

He began to publish poetry in ‘A Nosa Terra’ and in ‘Heraldo de Galicia’. In 1933 he joined a political party from Galicia, with ideals based on the Galician nationalism, and a year later he published his first series of poems entitled ‘Bebedeira’ in the magazine ‘Nós’. After the beginning of the Civil War, he went into exile first to Portugal and France and three years later to Mexico, where he had several jobs. In exile he collaborated with several organisations such as the Galician National Alliance, the Galician Athenaeum in Mexico or O Fogar Galego; In addition, he directed the magazine ‘Saudade’ and he also promoted the creation of the magazine ‘Vieiros’. In 1963 he published ‘Galicia Infinda’ and in 1981 ‘Cantaneras’. Five years later he published his latest book in Mexico entitled ‘O soño dun guieiro’.

Finally, it is important to comment that Rosalía de Castro, mentioned at the beginning, has been taken into account in Florencio Delgado’s early writings. Already as a poet, Rosalía is cited by Delgado Gurriarán at different times. “In the poems he writes during the Civil War, published in anti-Franco magazines, there are verses that mention Rosalía, along with other poets, as a voice of struggle, of resistance against Francoism”.

Next article The Symbolism contained in Apotropaic Masks