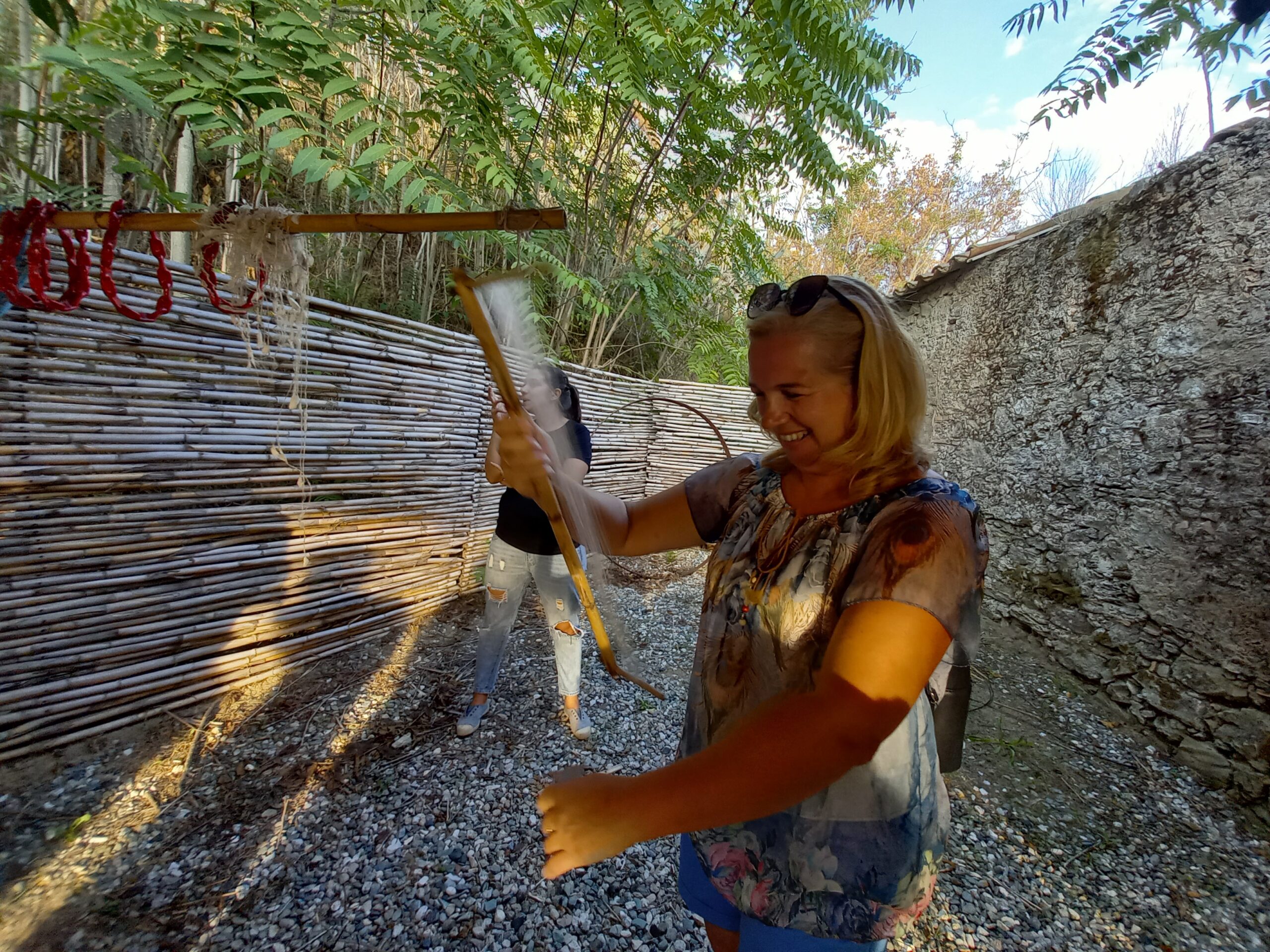 The Nido di Seta Cooperative was founded in 2014 in San Floro, a town in the province of Catanzaro, which at the turn of the 18th and 19th centuries was considered the European capital of silk. The entire area was in fact the most important center of silk production in Europe, around which formed a production circuit that traced a “Calabrian silk route”.

The goal of this enterprising young Calabrian (Miriam, Giovanna and Domenico) was to exploit the enormous potential of their land by reviving the ancient silkworm industry through a redevelopment project that allowed them to regenerate the 3,000 mulberry trees (which are the staple food of the silkworm) that had been completely abandoned in the town of San Floro.

So, they started by being taught the secrets of mulberry cultivation by the last heirs of this tradition, the elders of the village. They then followed a training course at the Institute of Sericulture in Thailand, learning unconventional methods of silk processing, and finally traveled to Mexico to discover new natural dyes.

“Metamorphosis is the last stage of the silkworm’s growth process, a slow but predictable path. From the hatching of the eggs, which are about two millimeters wide, the silkworm feeds continuously for twenty-eight days, the duration of its life cycle. During the cycle it grows exponentially, growing so fast that its skin cannot grow with it, and so it stops four times to molt, once every five days. On the 28th day, the worm stops eating and releases all of its waste. Then begins the creation of the silk cocoon, which lasts three days, and then there is the process of metamorphosis. The four main stages of sericulture are bubbling, silkworming, reeling, and twisting. Through steeping, sericin, the rubbery substance that glues the cocoon together, softens. Then, with stripping, the cocoon is rubbed with a brush to free the end of the thread and finally, during the actual wrapping, the continuous thread is unraveled from the cocoon. In the last part of the third stage of transformation into yarn, the cocoons are immersed in hot water to unravel the filament. In order to produce a silk weaving yarn, the threads of at least six or seven cocoons must be joined together, which, thanks to the sericin, remain cohesive during reeling.”

Around  the Nido di Seta, an artisan network has been formed that extends throughout Calabria and is characterized by a particular attention to female entrepreneurship (about eight artisan women from all over the region collaborate), another important aspect that identifies the history of the cooperative, which produces yarns, fabrics and finished products: fabrics, scarves, ties, accessories, wedding dresses, jewelry and footwear (all strictly in silk) are the most valuable products that the company produces.

However, textile production is not the only activity promoted by Nido di Seta, which since 2015 has been certified organic and is also dedicated to the organic cultivation of mulberries (also because the silkworm is very sensitive to pesticides), thanks to which a wide range of products stands out, such as extra mulberry jams, as well as herbal teas and liqueurs.

It is no coincidence that among the missions of the Cooperative are: environmental protection and landscape, growth of the territory and sustainable development.

This is a real model of sustainable and alternative development that integrates natural resources, crafts and cultural tourism, triggering a virtuous circle that daily transforms San Floro in a pole of attraction for national and international tourism.

The idea of creating a network of experiential tourism packages related to the tradition of silk is realized with continuous activities of stimulation, such as the Silk Academy, a series of workshops lasting one weekend, divided by theme, which aim to educate new people (very often from various countries of the world) on the various stages of processing, such as the breeding of the silkworm, both in the various stages of spinning and weaving craft, and then the natural dyeing.

We can say that in San Floro there is currently one of the very few companies in the world to produce a silk yarn entirely sustainable and dyed exclusively with natural dyes.

A very positive story of local (but at the same time international) entrepreneurship that can inspire the increasing number of young people in Calabria who want to revitalize their land by taking advantage of the skills they have acquired around the world and making the traditions of the past shine.