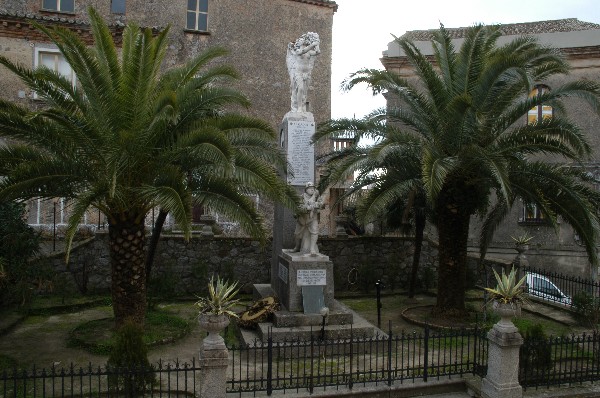 Today I would like to introduce you the war memorial you can find in Santa Caterina, Southern Italy.

First of all let’s define a war memorial: it is a commemorative object intended to remind us of the people who served in a war and died. Luckily, in modern times the main intent of war memorials is not to glorify war, but to honor those who have died as a result of a war.

Many war memorials often take the form of a traditional monument or statue, while others consist of entire buildings, often containing a museum, while yet others are simple plaques. War memorials can take a variety of other forms, including commemorative gardens, stadiums, eternal flames, urban plazas, stained glass windows, gateways or fountains. In Santa Caterina the war memorial took the shape of an obelisk monument.

The war memorial in Santa Caterina has got a bronze star depicting an eagle with a wreath, laurel and oak branches.

The monument was realized in the years 1928-1929 and its particularity is that it had been financed by inhabitants of Santa Caterina who emigrated in New York.

I warmly recommend you to take a walk through the enchanting streets of Santa Caterina!

Next article THE CHRISTMAS CAROLING TRADITION IN POLAND