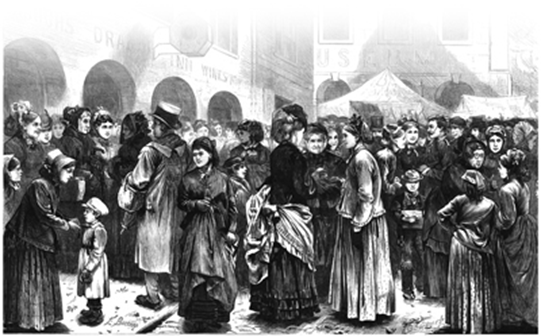 It has it origins in the statute fairs that have existed for centuries. Also known as a hiring fair or mop fair, these were traditionally held in order for agricultural servant to advertise their availability for work, and for employers to find suitable workers. Although traditionally held in the Midlands and south of England in late September or early October – Michaelmas in the agricultural calendar, when harvesting for the year had been done – others were held in November (in the north of England) or April. The mop fair was tied to the seasons and to the harvests, reflecting its status as a place in rural societies where agricultural workers were hired.

A hiring fair in Warwickshire, as shown in an 1872 issue of the Illustrated London News

The hiring fair had officially started in the 14th century, when Edward I passed the Statute of Labourers in 1351. The 1563 Statute of Apprentices legislated for a particular day of the year when the local constables would proclaim the stipulated rates of pay and conditions of employment for the following year. As fairs were already popular events, seeing many local people attend, they became the main place where workers and employers would assemble to be matched with each other. In 1677, an act endorsed the annual bonds or terms agreed between masters and servants at hiring fairs, and the events took on the alternative name of statute fairs.

These fairs were an important arena for both male and female agricultural servants to bargain with employers, and arrange their work for the next year. Agricultural work in rural England generally ran from October to October, although there were some regional differences. These yearly hirings usually, although not always, included board and lodging for unmarried employers, and wages were generally paid at the end of the year’s service. However, this practice varied from place to place, with some workers paid weekly, fortnightly, and so on.

Hirings had an inevitable link to the settlement laws, with some unscrupulous employers seeking to end a servant’s employment shortly before the end of their year. This was because, under the settlement laws, a servant would gain a settlement in his place of employ if he worked there consistently for a year. This meant that the employer’s parish would have to pay relief for the servant if he became poverty stricken through illness or subsequent unemployment. Therefore, some employers – who may have had to pay rates to cover their parish’s poor relief – may have tried to limit the number of people who could claim this relief by ending an employment early. And there were few formal contracts in terms of stating when earnings would be paid. Instead, at hiring fairs, workers would gather in the street or local market place, often carrying a badge or tool to show what kind of work they did. For example, shepherds held a crook or a tuft of wool; dairymaids carried a milking stool or pail, and housemaids held brooms or mops – hence the origin of the third name of ‘mop fair’. They would meet with local employers and the latter would choose who they wanted to employ.

Once that decision had been made, they would give the servant a ‘hiring penny’ – more often a shilling, but referred to still as this term – to show that an agreement had been reached. Once the hiring penny had been given, the servant would remove the symbol of their availability and employment type, and wear bright ribbons to show that they were hired. They would then spend their penny at the stalls which were set up on the fair.

From employment to entertainment

By the end of the century, there was no doubting that the main function of the fair was now entertainment, not employment. By 1898, the Stratford-upon-Avon mop fair, which was described in the press as “ancient – in existence several hundred years”, was still attended by “thousands of persons”, but could no longer be described as a hiring fair for servants.

Today, the mop fair continues to be held every year – and the merriment, the spending of money on enjoying oneself, and the name are the same as centuries ago. Only the main aim of the fair has disappeared.

Next article The Red Inn