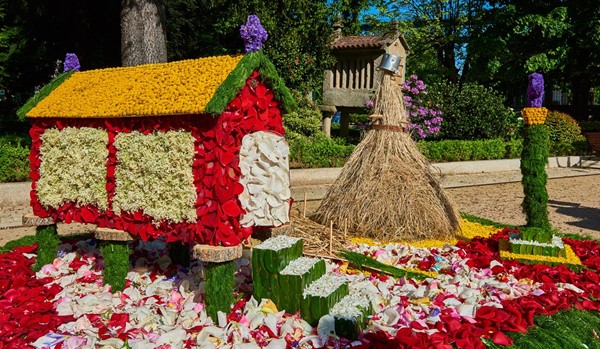 The Festivity of May is a popular event celebrated in the first days of May. Its origins, still controversial, go back, on the one hand, to thousands of years ago, possibly in the Neolithic period with the consolidation of agriculture and sedentary life style; on the other hand, some historians defend that its origins date back to specific manifestations of the Roman period. Whatever its origin, what we do know is that it is a tradition that has lasted for thousands of years.

The Maios is a festival to welcome spring. It is a time of exaltation of nature that takes place at the beginning of spring. The Celtic festival of Beltane, historically celebrated in the regions of Ireland, Scotland, Galicia or the Isle of Man, marked the beginning of the “pastoral summer” where herds of cattle were taken to the fields to graze. In Galicia, this festival was celebrated with the night crop collections with torches and spreading the ashes through the fields of cultivation.

However, this Celtic celebration has undergone variations with the stay of the Romans and Muslims in Spain. With the arrival of Christianity, these pagan traditions were assimilated and became religious festivals to honour the Virgin. Continuing with the tradition of thousands of years ago, the rites around these floral decorations were linked to the achievement of abundant harvests, although on the other hand, it was also believed that it was a celebration of the end of winter and the arrival of the fruits. Bonfires were lit accompanied by the farmers’ songs on the last night of April to ward off bad weather and animals that could cause damage to crops. Also linked to the Christian tradition, the fields were blessed with holy water to ask for abundance in the harvests. Finally, houses, stables and carts were decorated with bouquets of broom to dispel possible dangers, a tradition that still lasts today.

Currently, the festival of the Maios in Galicia has undergone different variations and today it consists of the exaltation of nature with songs and dances around the Maios, floral structures inspired by tree figures, adorned with flowers, fruits and leaves.

The children got to my door

and laying to me

they asked me for chestnuts

from my chestnut trees.

I have nothing to give you.

I am your poor

of the Galician people:

for me there is no May.

For me it’s always the winter!

free from the owners

and my bread won’t be taken away by

my fields shall bloom,

then it may come

the May that I want.

Do you want chestnuts

from my chestnut trees…?

Sing to me a Maio,

without witches nor demons,

a May without harvests

without country houses nor doors, nor privileges nor clergies.