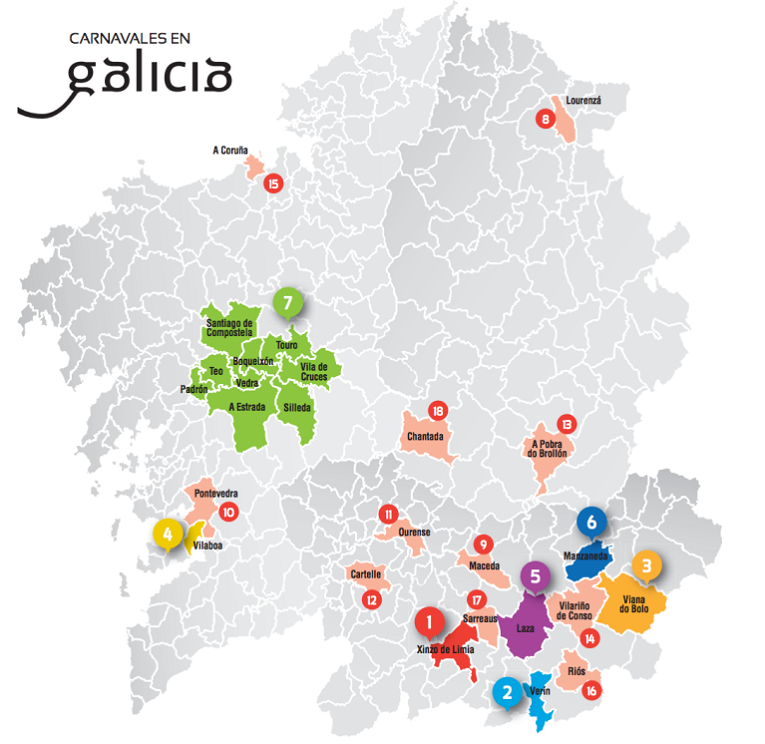 We start the most colorful celebration of the year and with it come the troupes, the party, the delirium, and the debauchery.

As we know it today, Carnival is a tradition from countries of Catholic faith. It was the Church who, in the Middle Ages, gave this playful tradition its etymology, carne-levare, which in vulgar Latin means abandoning meat. Later, the Italian word Carnevale (to leave meat) would prevail, which is the one commonly used today, whose literal meaning refers to the time when the people could enjoy a diet rich in meat – a symbol of the rebirth of virility – before starting a 40-day period of abstention, known to Catholics as Lent.

Other theories attribute the carnivalesque tradition to the idolization of Carna, daughter of Heleno, goddess of broad beans and bacon. And speaking of Celtic traditions, we get to the heart of the matter, which is the tradition of Carnival in Galicia. No less than 7 Galician Carnivals or “Entroidos” boast of being officially recognized as “Festivals of Tourist Interest”, and a whopping 175 municipalities throughout the community have established Carnival Monday and Tuesday and Wednesday as holidays. of Ash.

Already in the eighteenth century there are documents that collect the celebration of the Entroido in several Galician municipalities, Ourense being one of the provinces that shows the greatest passion and love for Carnival. Therefore, Galicia was – and still is – one of the few communities in Spain that continued to celebrate this festival during the prohibition period.

Broadly speaking and with minor differences, the carnival can begin in the last weeks of January and end in March, or in some more privileged places and lovers of partying, it can extend until April, as is the case of Manzaneda, a small and beautiful population of Ourense where months of preparation are invested to celebrate the Carnival! Dedication above all.

In a Galician Entroido you can find revelry, fun and color, but also an ingredient that will not disappoint you and that is essential in this little corner of the peninsula when we start organizing any type of gathering -festive or not-: Gastronomy. The most obvious case is the Entroido de Viana do Bolo, commonly known as “Festa da Androlla e do Entroido”. The name says it all. This is one of the oldest carnivals in Galicia and authentic from the old continent. The lucky visitors will not only enjoy a jovial atmosphere, but they will also have the enormous pleasure of tasting the tasty androllas of the region, just at their point to the delight of the diners. Other typical Galician delicacies of these dates are the cachucha, the bica branca, xastre or coffee liqueur, very typical of Verín and Laza. Go, that in Galicia… You have to “enche-lo bandullo” to be able to dance! It makes my mouth water.

For historians, Xinzo de Limia offers, along with Laza, one of the wildest parties on the peninsula. This Entroido is the longest in Spain although, as we said before, the inhabitants of Manzaneda are happy to compete with it as to who can put up with the party the longest. If the Carnival is to make fun of everything, the Entroido of the Ulla region makes fun of something as ridiculous and unnecessary as war. Popular in 9 Galician municipalities, this festival is inspired (and mocked) by the Napoleonic invasions of the s. XIX.

But not everything is to put on the first thing you find and go out to hesitate the staff with a mask. There is also prestige in these parties. Laza enjoys the most elegant carnival, with a famous parade in which the social status of the attendees is made clear with costumes in which only the hat of the Madamas (7 kg of paraphernalia) can take up to a month to make. Other carnivals like the one in Verín also have their traditional characters and costumes. For example, dressing up as a Cigarrón – a suit that can weigh up to 25 kg and in which you need the help of several hands to put on it – is a tradition and privilege for the inhabitants of this region of Ourense. Many have been cigars for more than 40 years!

And as it is Galicia, the most gothic element cannot be missing: The spirits, which are scared away with the noise of the brass bands and troupes. To this end, holy water is parked and “instrumental weapons” made from animal bladders, drums, or farming instruments are used. It is not the Valencian firecracker, but the decibels that you do not see go up.

In the Galician Entroido, the only thing that is not allowed is to be left out of the party. The most famous characters of the Galician carnival, the Screens (Xinzo), El Cigarrón (Verín), the Boteiro and the Folións (Viana), the Madamas and Galáns (Cobres), the Peliqueiros (Laza), the Xenerais and Correos (A Ulla ), among others, are in charge of animating the party and whipping those who do not want to participate in the “jolgorio”.

For the curious and lovers of strong emotions and impregnated with culture and celebration, the Galician Entroido is a sacred tradition that does not forgive or forget anyone who lives it.

Previous articleHermit of Monte Stella - A catholic sanctuary inside a cave

Next article A Museum of Instruments and Popular Music from Calabria