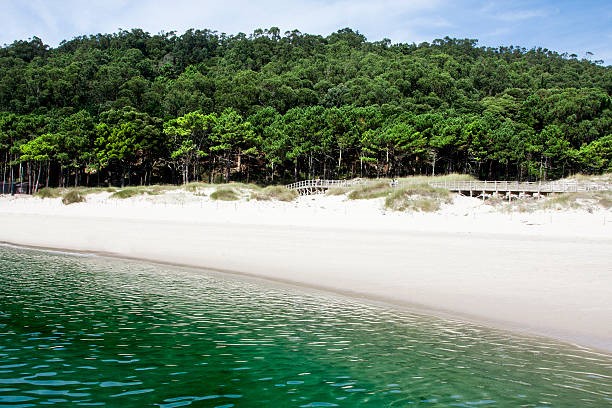 Named by the Romans “Islands of Gods”, the Cíes Islands are located on the coast of Pontevedra, in the Ria de Vigo and they may be one of Galicia’s biggest treasures.

The Cíes Islands is an archipelago made of three islands: Monteagudo (Sharp Mount), do Faro (Lighthouse Island), and San Martiño (Saint Martin). These Islands are well known for their breathtaking landscapes, clear water, and wild nature. 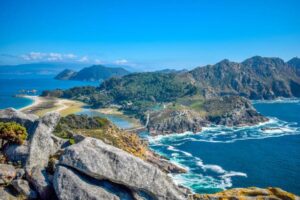 But apart from its beautiful landscapes, the Cíes Islands are marked by an important cultural heritage and signs of history characterized by an extensive architectural and archeological heritage. Indeed, throughout history, these islands have been inhabited and have seen the presence of many different civilizations, of which remains can still be seen around the archipelago today.

The most important remains came from Roman and Celtic settlements, from monks from the Middle Ages, and from fishermen and livestock farmers. For instance, if you wander around the islands, you will find monasteries, windmills, lighthouses, and even blacksmiths. Also, there are some religious remains like chapels, a cemetery, and a convent. 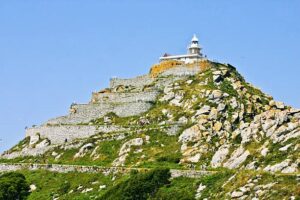 In addition, it is interesting to note that there is also a rich submerged heritage characterized by the presence of underwater archaeological remains, such as lithics anchors, galleons, or even a German submarine from World War II.

Besides the architectural and archeological heritage, the Cíes Islands hold an extensive cultural heritage. Historically, the inhabitants of the islands were isolated from the rest of Galicia, and as a result, rituals, myths, and superstitions specific to the area were created.

This heritage also appears through many legends and myths about the archipelago. The best-known legend tells that numerous galleons and ships sank near the islands and that in the 19th and 20th centuries, expeditions from all over Europe went to the Cíes Islands to try to recover the treasures of the galleons that sank but none of them succeeded. To this day, even though it is assumed that the value of the remains of the galleons is purely archaeological, many Galicians believe that there is still a treasure.

Declared a Natural Reserve in 1980, the Galician government wants to protect the natural space. Therefore, in order to visit the Cíes Islands, it is necessary to make a reservation in advance. In addition, there is a set limit of only 450 visitors per day. Finally, it is worth mentioning that the Cíes Islands have applied to become a Unesco World Heritage Site.

Next article Titanic: The Unforgettable Incident That Is Part Of Southampton