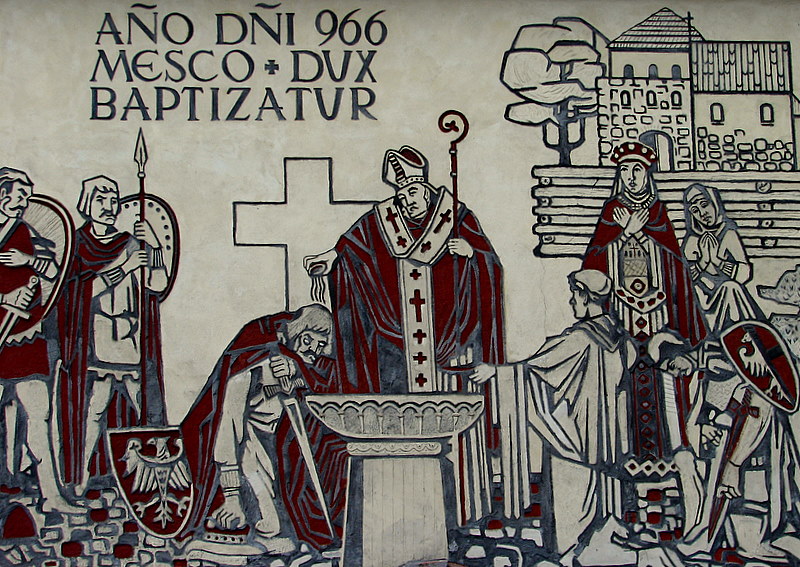 The baptism of Poland was a long-term process that Mieszko I began in 966, which allowed him to join the political game in Christian Europe.

It cannot be disputed that Mieszko I chose to be baptized for political motives rather than spiritual ones. As time went on, neighboring states began to embrace Christian culture. As a result, the state of Mieszko I also had to take this action in order to be taken seriously on a global scale. The Baptism of Poland marked the end of Mieszko I rule, who had already managed to organize the newly established state well.

Political reasons were primarily ones of which persuaded Mieszko I to accept baptism. Western European powers sought to further their geographical conquests under the guise of “conversion,” taking use of the Christian religion. The lands belonging to the pagan Slavs were perfectly suited for this purpose.  Otto I, the emperor, and Boleslav I the Cruel, the duke of Bohemia, were seen as a real threat by Mieszko I. He chose to be baptized by the Bohemian bishops because he did not want to become overly dependent on the Emperor, to whom he was already paying tribute. Mieszko I also made the decision to wed the Bohemian princess Dobrava in order to forge a long-lasting relationship with the prince of Bohemia.

Following his baptism, Mieszko I increases his both the internal and exterior strength. Christianity proclaims that power comes from God, so it is forbidden to oppose the prince’s decision. In addition, Mieszko I joined the ranks of the Christian princes in the orbit of Emperor Otto I.  This gave him the opportunity to support the Saxon Lords in their conflict with the Swabian tribes. But most importantly, it gave him the independence to run the state alone and halt German expansion into Slavic lands.

What is more, the baptism brought new wave of clerics to the state of Mieszko I, who were the only group of educated people besides courtiers.  The only people who could read, write, and knew Latin, a language used in international correspondence, were members of the clergy. The demand for new churches and monasteries developed building and sacred art.  Also thanks to their knowledge of farming, the use of new tools and the application of the two-field system, an agricultural economy developed. In addition to protecting Mieszko I from potential conversion attempts, baptism also helped him solidify his position of power and allowed the Vistula River tribes to advance intellectually and economically.

Read more about Baptism of Poland:

Next article “The Sleeping Mermaids” and the art of sculpture by Baldissarro - Calabria, Italy