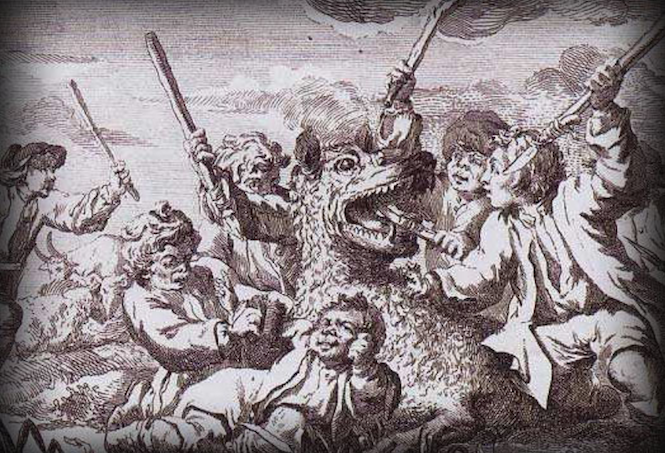 We have spoken on many occasions about the cultural heritage of our country, specifically that surrounding the Autonomous Community of Galicia. Most of the times we spoke about places, about celebrations… however our heritage goes beyond that and also includes other inmaterial and untouchable aspects such as legends. This is what happens with the legend of the Vákner. A mythological beast that it is believed that some pilgrims had to face on their way to Santiago.

But what is exactly a “Vákner”? And when it was seen for the first time?

Animal for some and mythological entity for others, the term designates the being that the pilgrim Armenian Martyr (bishop of Azerbaijan) found in his path to Fisterra (1491) and who has become a symbol of the Jacobean Prolongation to Fisterra, Galicia. Martir’s diary and his encounter with the Vákner has supposed rivers of ink and the most diverse hypotheses that have survived to this day, without the question having been clarified in any way. In his diary, Martir reflects what happened:

“I received the blessing from Santiago, I continued the path and I came to the end of the world, to the beach of the Holy Virgin, where there is a church built with his own hands by the Apostle Saint Paul and which the Franks call Sancta Marie de Finisterrae. I suffered a lot of work and fatigue in that trip, in which I met a large number of wild and very dangerous beasts. And I met the Vákner, a wild animal, large and very harmful. How, they told me, could you save yourself, when groups of twenty people cannot pass? I immediately went to the country of Holani (Holland), whose inhabitants also eat fish and whose language I did not understand. They treated me with the utmost consideration, taking me from house to house and wondering that I had escaped from the Vákner. “

Many scholars have tried to clarify the words of Martir, with more or less luck. García Mercadal opposes the translator of Mártir – who alleged that he was referring to a bull to a bear – believing that Mártir undoubtedly describes a lynx or cerval wolf. Klaus Herbers and Robert Plötz are inclined towards Mercadal’s thesis, while other authors such as José Luis Pensado, professor José Luis Monteagudo and, above all, the great researcher and student of the legends and traditions of Fisterra, Fernando Alonso Romero, point in other directions. This indicates the impossibility of a bull, cow, bear or lynx preventing the passage of large groups -20 people-. It analyzes a series of mythical beings from the region and other northern regions – the Basque Besajaun; the Secular das Nubens, Portuguese; the Asturian Nuberu and Nubeiro himself from the region of Fisterra- but nothing fits Martyr’s description. Alonso Romero requested the collaboration of the great Compostela scholar and professor, Luis Monteagudo, and both resorted to the old Pokorny dictionary and from that base they indicated some keys: Indo-European wagh: ‘shout, resound, rumble’; Latin vagius: ‘moan, whimper’; Danish vakker: ‘alert’; Old Norse vargr: ‘wolf’.

Thus, something more related to the animals that could appear in the region, in the case of wolves, was presented, but it was not enough. A pack of wolves could act terrorizing a region, but Martyr speaks of a single animal. One more step brings us closer to European tradition: the peasants called varuly, in Denmark, to demonic beings that, at night, attacked man. Those same beings were called in Sweden varul and in England, warewolf. What happens is that, from unknown times, those same beings were called in Galicia lobishomes, [werewolves] and have been part, for centuries, of a daily reality such as has not been experienced in any other part of the Iberian Peninsula.

The lobishome is in Galicia the dark side of a sinister nightmare, reflected – still in the 19th century – in the case of the famous Manuel Blanco Romasante, “the werewolf of Allariz”, who confessed the murder of countless women in the mountains and trails of Orense. Something like this was already pointed out by the inquisitor Torquemada: “In the kingdom of Galicia a man was found who was walking through the mountains in hiding, and from there he went out to the roads covered with a wolf’s hide, and if he found some young men out of control, kill them and get fed up eating them. And the damage that he was doing was so great that those of the earth tried to take that beast out of the world and seized him, and seeing that he was a man, they put him in a prison […] stuffed himself with raw meat and died before justice was done in he.”

Also, according to Bouza the so-called “lobo da xente” lived in Trives, a young man transformed into such an animal because of a curse. It was popular belief that the seventh male child in a family could have such a fate; or also, if the child was born on Christmas Eve. It was enough for the young man one night to run “through seven fountains, seven bridges and seven mountains.” Also run for Galicia and north of Portugal the beautiful legend of the shepherd of the wolves.

Vicente Risco, the great Galician polygraph, carried out an in-depth study on lycanthropy in Europe and, especially of the lobishome in Galicia, analyzing the judicial processes and the medico-psychiatric analyzes. For Risco there is not the slightest doubt that the persistence in the Celtic culture of the cult of the wolf has resulted in a series of psychiatric and genetic diseases and the only model that a peasant, primitive and arcane society lent them to express their disease it was living in the mountains, desolation and death.

However, at another point on the Jacobean routes, near Le Puy, one cannot fail to note the presence in the 18th century of another mysterious beast or animal, which brought desolation to the region and concern itself. King Louis XV, the infamous Bête de Gevaudan, according to all chronicles, a great wolf. In one way or another, and whatever Mártir saw, these legends make up the mythology and the deepest soul of one of the most remote regions of all the Jacobean routes: the Fisterra from Galicia.

Next article Why are 3 hundred tons of St. Martin’s Croissants eaten in Poznań on the 11th of November?