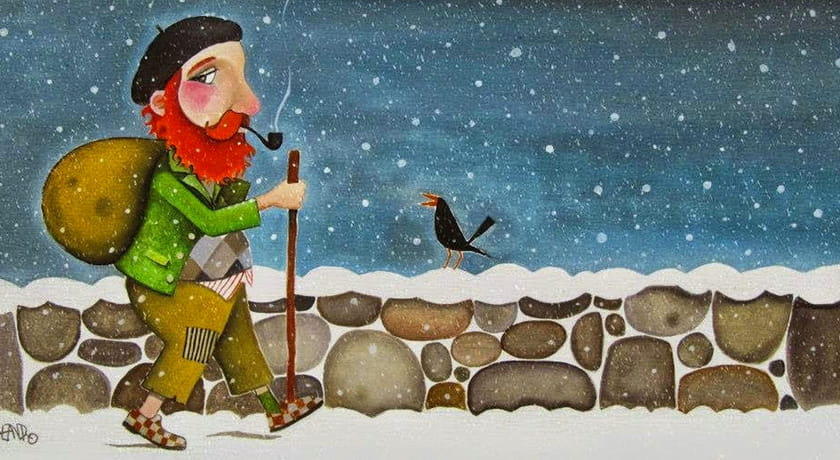 In the mountains of Lugo, mainly in the valleys of O Cebreiro, Courel, Louzara and Ancares, is where the figure of a strong old chickadee who traditionally touched the belly of children survives. Until very recently, almost nothing was known about the figure of this mythical being: the Apalpador. He is always described as a burly, fat, bearded man and arrives at Christmas and New Years’ Eve. But it is not Papa Nöel or Santa Claus. It also has nothing to do with the Magi, although they all share a common goal: to encourage the smallest of the house.

According to tradition, the Apalpador lives in the mountains, dedicated to making charcoal. He is a giant who wears a beret, an old and patched jacket, smokes a pipe and feeds on wild boar and wild boar meat that he hunts on the hill. That is more or less the image that the old people of the regions of O Cebreiro, Courel, Louzara and even Ancares have of him, who remember the stories that their grandparents told them.

This mythical figure of Galician Christmas shares a certain familiarity with Saint Nicholas, the forerunner of the European Santa Claus, and also with the Basque Olentzero studied by Pío Caro Baroja. According to tradition, the ‘Apalpador’ went down to the valleys to “touch” the belly of the little ones and leave them chestnuts in case they were very weak.

Next article The symbology of the tree. The Christmas tree and the tree of life in the Calabria region