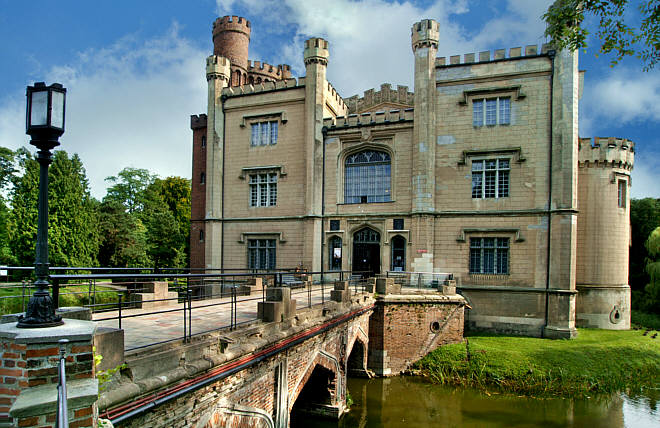 The White Lady of the Castle in Kórnik is one of Greater Poland’s most recognizable ghost tales. This is probably the best known castle in the region of Greater Poland. Kórnik is a small town located ca. 20 km south-east from Poznań and visiting it is an all-day event, with the castle in centre, but also with many attractions nearby. The history of the castle in Kórnik began in the 14th century, but since that time it has been converted many times. The last conversion took place between 1838 and 1891. Today the castle has an english Neo-Gothic appearance outside (lump and elevation) and a Gothic-Renaissance appearance inside the walls. The castle is surrounded by a medieval moat with a Neo-Gothic bridge.

The Kórnik Castle’s most famous resident was definitely Teofila Działyńska, better known as the White Lady, who according to a popular legend appears every night as a ghost.

The legend tells a story of Teofila, hairess of the noble Działyński family that owned the Castle in Kórnik and all its surrounding lands. Having divorced her second husband, Teofila took charge of the castle and focused on managing it. She rebuilt and renovated the estate, transforming it into an astounding baroque residence. However, due to a curse casted upon her by the devil, Teofila’s ghost is believed to be eternally wandering the castle’s hallways.

The legend says that every night, shortly before midnight, Teofila leaves her portrait, which hangs in the castle’s remarkable dining hall, and heads towards the terrace. There, promptly at midnight, a mysterious knight on a dark horse appears and takes her for a ride around the park’s alleys.

‘The White Lady’ name takes its origin from the long white dress Teofila was painted in. Her portrait became Kórnik’s trademark and one of the main tourist attractions of the region.

Next article After a year of covid lockdowns: LTT 1 realized in Italy! The full experience of our delegations in the Calabria region