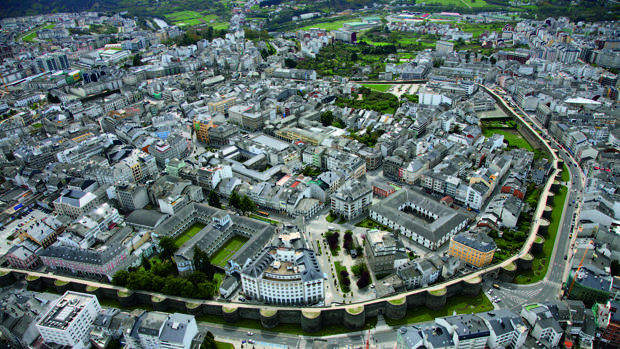 Yes, you have read correctly, the oldest in Galicia, since it dates from the 25th century BC.

In the 1st century BC the Roman Empire had already conquered practically the entire Iberian Peninsula, with the exception of the northwestern territories dominated by Galicians, Asturians and Cantabrians. In the context of the so-called Cantabrian wars, around the year 25 BC the Roman army established a military camp on high ground, easy to defend and close to the Miño River, in order to continue its expansion in the westernmost region, which at the beginning of the 4th century it was renamed the Gallaecia Province. The foundation of the city of Lugo is most likely based on this camp of military origin.

Around the year 15 BC Paulo Fabio Máximo, legacy of the Emperor Octavio Augusto, ordered the founding of the city of Lucus Augusti, the oldest city in Galicia and which would eventually become the capital of the Lugo legal convent. It will be one of the main cities in the northwest of the peninsula, together with Bracara Augusta (Braga) and Asturica Augusta (Astorga), which will be the capitals of their respective legal convents.

The cities were the instrument of organization and administration of the territory of the Romans, in front of the scattered population of the Galician forts, which will progressively integrate into Roman society, merging both cultures. The increase in economic activities favored the development of Galician cities, especially in the Braga and Lugo convents, with ports such as Vicus (Vigo) and Brigantium (A Coruña).

Lucus Augusti’s layout corresponded to the usual arrangement of Roman cities, marked by the thistle from north to south and the decumanus from east to west. The forum was at the intersection of the cardo and the decumano, coinciding with the current Praza de Santo Domingo, Rúa da Raíña, Rúa do Progreso and one end of Praza Maior. Up to the forum reached the aqueduct that supplied the urban center with water and of which some remains are preserved in Rúa San Marcos, in front of the Palacio de la Diputación.

Roman constructions that we can see today in Lugo:

The old route XIX of the Itinerary of Antonino crossed the river Miño through the bridge of Roman origin, communicating the main cities of the peninsular northwest: Bracara Augusta, Lucus Augusti and Asturica Augusta. Today part of that route continues to be traveled by pilgrims who travel the Primitive Way to Santiago de Compostela through the bridge over the Miño, an environment of great natural wealth that is part of the Terras do Miño Biosphere Reserve.

The Roman BathsThey are located inside the Hotel Spa, on the banks of the river Miño, and its medicinal waters, which arise at more than 40º of temperature, continue to take care of our health today. From the Roman building the apodyterium is preserved, a changing room in which they left their clothes before accessing the bath rooms. When Christianity became the official religion of the empire in the 4th century, these altars considered pagan were destroyed.

The House of Mosaics: It is located near the Plaza Mayor (another must-see, but let’s continue with the story) it was built between the 1st and 2nd centuries and was occupied until the middle of the 5th century. The excavations were carried out by chance, since a house that shared solar was to be rebuilt. The discoveries were surprising, mosaics, wall paintings, column bases and remains of the hypocaustum, which was the heating system that ran through the floor.

Lugo Cathedral: This time we change the century and therefore the historical period, but for one reason, the indisputable appointment with the Cathedral of Santa María de Lugo. The construction of this marvel lasted more than a century, this being the main reason for its mixture of Romanesque, Gothic, Baroque, Renaissance and Neoclassical styles. The master Raimundo de Monforte began works that lasted from 1129 to 1273, so its walls treasure the work and stories of many families.

The Roman wall of Lugo: At the end of the 3rd century AD, coinciding with a serious political, social and economic crisis throughout the Roman Empire, Lucus Augusti began the construction of a defensive wall, surrounded by a moat, to protect himself from a possible attack by the so-called towns. barbarians, who threatened the borders of the empire. The main material used was the most abundant stone in the region, slate, combined with granite at certain points. The appearance of the Roman wall of Lugo was different in origin, since each of the 85 original towers was 2 stories high and windows in the shape of a semicircular arch. The tower of A Mosqueira is the only one that preserves two of the windows of the first of the two stories high of the wall.

“The Roman wall of Lugo has been declared a World Heritage Site by UNESCO in 2000 for its good state of conservation and for being unique in the world. It is the only Roman wall that preserves its entire perimeter, approx. 2,140 meters that you can go completely by walking along the walkway“

The Domus of Mitreo: In the place where the 3 World Heritage sites of Lugo converge – the Roman wall, the Cathedral of Santa María and the Primitive Way to Santiago de Compostela – the Domus del Mitreo is located on site, right next to the Porta de Santiago, one of the 5 gates of Roman origin in the wall.

It was the home of Gaius Victorius Victorinus, Roman centurion of Legio VII Gemina Antoniana and tax collector of the city. It was destroyed by the construction of the wall, although inside the house a temple dedicated to the god Mitra, a divinity of eastern origin, highly venerated by the Roman legions, was preserved. This is one of the few Mithraic temples discovered in the Iberian Peninsula and the altar dedicated to Mithras is one of the best examples of Lucus Augusti epigraphy.

Other places of interest:

Santiago Gate: One of the 10 gates in the wall of Lugo and which gives direct access to the square where the cathedral is located.

Plaza Mayor and Lugo Town Hall: Although the Plaza Mayor de Lugo are not the most remarkable points of the city, the truth is that this part meets the ideal conditions to be a meeting point. In the arcades that line one side of the square there are charming cafes and some tapas bars and restaurants, where you can enjoy the terrace in summer or a good book and hot chocolate in winter. Also noteworthy is the sculpture dedicated to the founders of the city (Paulo Fabio Máximo and the Emperor Augustus), as well as the building of the Círculo de las Artes.

Ferrol Square and False Door:The Plaza de Ferrol, where the San Froilán chapel is located, is another emblematic meeting point for the people of Lugo. Behind there is the False Gate, one of the ancient Roman gates of the Wall, although highly modified, since at that time it was exclusively for military use.

Campo Castelo gate and old jail: Halfway between the Puerta Falsa and the Puerta de Santiago is the Campo Castelo gate and from there it is very easy to get to the building of the old prison, which is currently a social center where there is also a permanent exhibition on the life in prison and some temporary art exhibitions. This prison, during the war and post-war times, held more than 900 prisoners when in reality it was not prepared for more than 140 inmates. Individual cells could be occupied by up to 14 people. The overload of people was also palpable in the dining room, where all the menus were repetitive and rationed to unexpected points. Even if you only have one day in Lugo, make room for this visit.

Rosalía de Castro Park: This park, considered the main park in the city and the lung of Lugo, opened its doors during the 20th century, in 1925. At first, it was known by the name of Parque de Alfonso XII. Years later, it was renamed and renamed with its current name, Parque de Rosalía de Castro, to pay tribute to this poet and novelist, one of the most important references in terms of Spanish and Galician literature.

Next article Portchester Castle: A history through different eras!