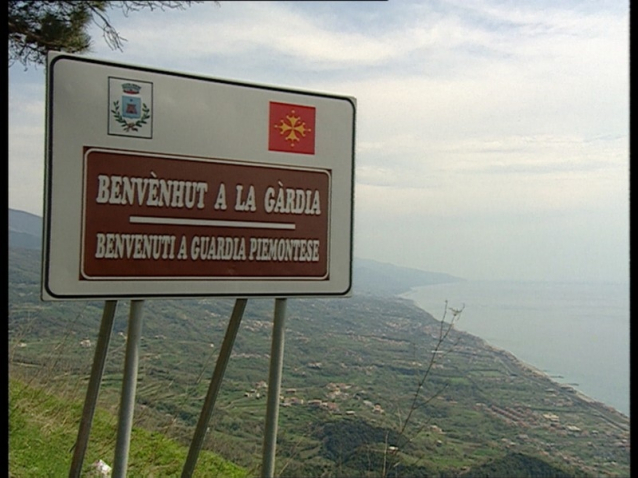 Collective memory is related to history and has an identity function.The construction of a collective memory is instrumental in fostering group existence, it plays an essential identitary role and it is a means of establishing a minority’s legitimacy. The history of Guardia Piemontese/La Gàrdia, the only occitan enclave in Calabria, is related to the Occitan world and the Waldensian Church. Around XIII-XIV sec. Waldesian communities from Piedmont sought refuge in this small town. Here a variety of Occitan, the so-called Guardiolo, has been spoken since then and it serves as the evidence of the tenacity of a community who faced almost impossible odds.

Occitania is the historical region in southern Europe where Occitan, a collection of Romance varieties, was historically the main language spoken. This cultural area roughly encompasses the southern third of France, as well as part of Spain (Aran Valley), Monaco, and smaller parts of Italy (Occitan Valleys, Guardia Piemontese). The term Occitan was used in the De Vulgari Eloquentia by Dante Aligheri who classified langue d’òc as opposed to the langue d’oïl spoken in Central and Northern France. As a demonstration of its literary dignity, Dante in The Divine Comedy (Purgatory, Canto XXVI) uses Occitan to express the thought of the troubadour Arnaud Daniel (12th century):

(Your courteous question pleases me so,
that I cannot and will not hide from you.
I am Arnaut, who weeping and singing go:
Contrite I see the folly of the past,
And, joyous, I foresee the joy I hope for one day.
Therefore do I implore you, by that power
Which guides you to the summit of the stairs,
Remember my suffering, in the right time.)

The language variety named Guardiolo is probably a mix of several Piedmontese Occitan dialects, from where the earliest settlers came, with a few borrowings from Calabrese dialect. However, it was the great distance between Calabrese dialect and Occitan that prevented an effective control of religious authorities on the meetings of Occitans. They were targeted by persecutions because of their devotion to the Waldensian religion.

“Lux lucet in tenebris” The Waldensians’ motto meant light shining in the darkness.

Even in the face of such strong persecution, the Waldensians refused to bow their knees to the darkness and error of the Papacy, they refused to be bullied into submission.

Waldism was declared a heresy by the Catholic church since XIII century, but after the CounterReformation (Controriforma) by the Roman Church against the spread of Protestantism in Europe it turned into a true persecution, especially when Occitans started to profess their religion openly: a terrible persecution of both Piedmontese and Calabrese Occitans began. Most of them were exterminated during a massacre that took place in 1561 in Guardia Piemontese and in the nearby villages. Sadly remembered for its brutality, a legend tells that blood was trickling down throughout the town finding an outlet in a large gate that since then is known as the “Porta del sangue” (Gate of Blood), the city’s main gate.

The use of the Occitan language was explicitly forbidden to the survivors but despite this people disobeyed the law and parents secretly transmitted Occitan to their children. Today Guardia Piemontese represents a small-sized ethnolinguistic “island” that shares with the other Occitan communities around the world a beautiful anthem, Se chanto, a tale of love. Is to the sound of music that smaller communities merge to larger ones to create a unique polyphonic choir.

Next article The best books written in Galician to celebrate WORLD BOOK DAY: