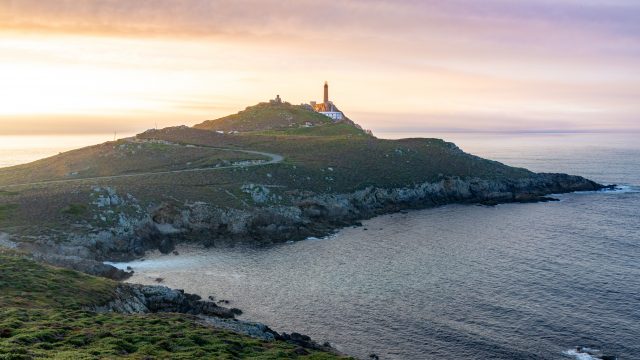 Camariñas is a small fishing village located in Costa da Morte, considered the capital of Lacemaking. But what is lacemaking? Have you ever heard the sound of the bobbins at the same time that a lace is being made? It is musical and relaxing and captivates all the visitors. “Palillar” is a very traditional activity that is done in many villages in Galicia, especially in the villages of Costa da Morte. It consists of weaving precious lace by hand with the help of bobbins on a pillow and following the drawing previously done on a cardboard. Cloths, tablecloths, sheets and even lace for wedding dresses are created with bobbins and pins and they achieve perfection.

During Easter, the Lace Festival takes place in Camariñas, an event that has been held for about thirty years and where “palilleiras” and craftspeople meet to exhibit their laborious work. At this event, you can see how they create these perfect pieces of lace and crafts, as well as attend one of the most important fashion shows in Spain where great Spanish designers present their work.

But how did it all start? According to history, in the seventeenth century, Galician nobles who returned from the Flanders war with Flemish wives brought these innovative techniques. During that time, lace was highly appreciated by high society, reaching its splendour in the following century, where the first bobbin encounters took place and still persist to this day. Later, in the late nineteenth and early twentieth centuries, Camariñas was already exporting its lace to America, an activity that gained great importance after the war conflicts. Nowadays, Camariñas lace is at its full peak and it is seen in sectors such as fashion, lingerie or even decoration.

Next article Killing the envy in Badolato - Calabria, Italy