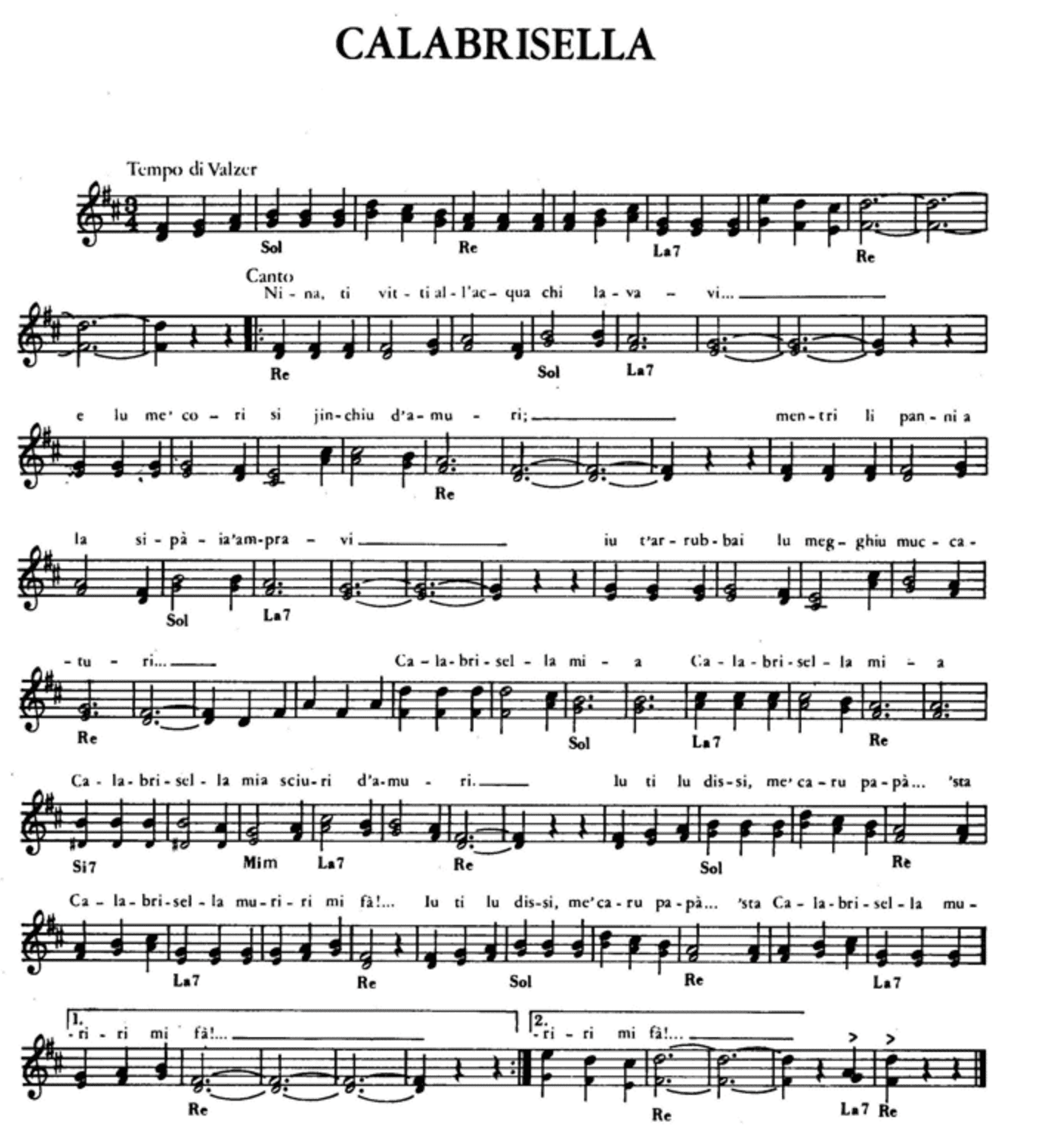 Popular love songs have always been at the heart of Calabrian tradition.
When a young man fell in love with a girl, he would go to her house at night in the company of friends to declare his yearning passion.
On the notes of the guitar (accompanied by other traditional instruments), the sounds of the serenade (the moment when a love song is dedicated) would reach the heart of the woman who could accept or refuse the proposal of love.

It is no coincidence that the most famous and traditional song of Calabria, ‘Calabrisella mia’, is precisely a hymn based on the love encounter between two young people.

This composition is usually attributed to a Sicilian composer who is said to have been in love with a Calabrian girl .

Although there are several versions of the composition (in Calabrian dialect) that vary from place to place (even some of the words are different because each town has its own dialect), the theme at the heart of the song remains unchanged and is basically simple and realistic, characterised by feelings and words as sincere as the hearts of the two young protagonists.

As is well demonstrated by these verses (which refer to the oldest version of the song) in which the girl compares her lover to a flower:

Translation: In my garden the white roses are a feast of colours, but among so many flowers the most beautiful is missing: you, carnation of love.

In the most recent and most famous version, the song begins with the lover remembering his first meeting with the maiden at the river:

The girl is washing her clothes, and the young man in love takes her handkerchief (in Calabrian, “muccaturi”, from the French “mouchoir”); this is because, especially in the south of Italy in the past, when a girl accepted the courtship of a boy, they would give each other a handkerchief “as a token of love”.

The song ‘Calabrisella’ then develops into expressions of admiration and love that culminate in the final refrain, where all the passion of the boy is manifested as he desperately asks the girl to make love to him:

The word Calabrisella implies a local and affectionate way of addressing the beloved.

Here you can find the lyrics of a short version of the song translated into English:
https://lyricstranslate.com/it/calabrisella-mia-calabrisella-mia.html

Below is the video where you can listen to the whole song:

Next article Halloween traditions in the UK