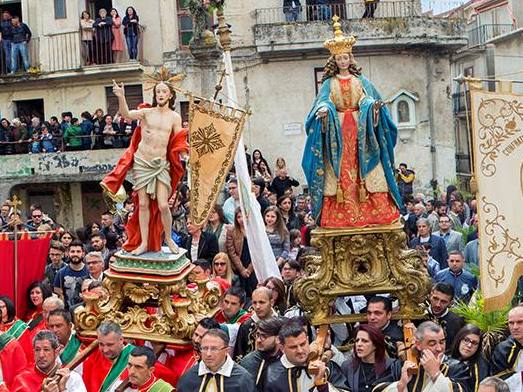 Sweets, preparations, embellishments, penances and rituals are the constant ingredients of every Calabrian festival and Easter is no exception, characterized by picturesque customs. On Easter Sunday, Calabrian villages become the scene of a peculiar performance for which streets and squares are flooded with spectators. We are talking about the Easter rite of the Affruntata, also known as Cunfrunta, Cumprunta, ‘Ncrinata, Svelata and Sbelata depending where it takes place.

This rite is the peak of the Easter festivities and consists of the meeting between the risen Jesus, the Virgin Mary and St John the Apostle. The definition stems from the disbelief that Jesus had been resurrected and the need for a direct “confrontation” with reality, meaning the personal acknowledgement of the miracle that has taken place. The event of Spanish origins, dating back to the 17th century, has variants also throughout southern Italy: in Sicily (Svelata, A Giunta o ‘U Scuntru, Madonna vasa vasa”), in Abruzzo (La madonna che scappa in piazza, La Madonna che Véle di Introdacqua) and in other regions (Campania and Sardinia).

It usually takes place in the streets and squares of the municipalities, where the statues depicting the Madonna, who wears a black cloak as a sign of mourning, Jesus Christ, St John the Apostle are carried on the shoulders of the faithful. When the moment arrives, the Saint goes to announce the resurrection several times to Mary, who remains incredulous at first, and the pace of the men carrying the statues is slow at this stage. As one proceeds, the pace becomes faster and faster and becomes a race. In fact, on the last step, both St John and Our Lady of Sorrows meet running in front of Jesus. At this moment, the black mantle of mourning is pulled off and the statue of Mary appears in all her splendor.

This is a very important moment of the whole event, because a bad outcome of the function is according to tradition an omen of misfortune for the community. Once the meeting has taken place, the band sings a triumphant song and a big round of applause fills the village, accompanied by deep emotion.