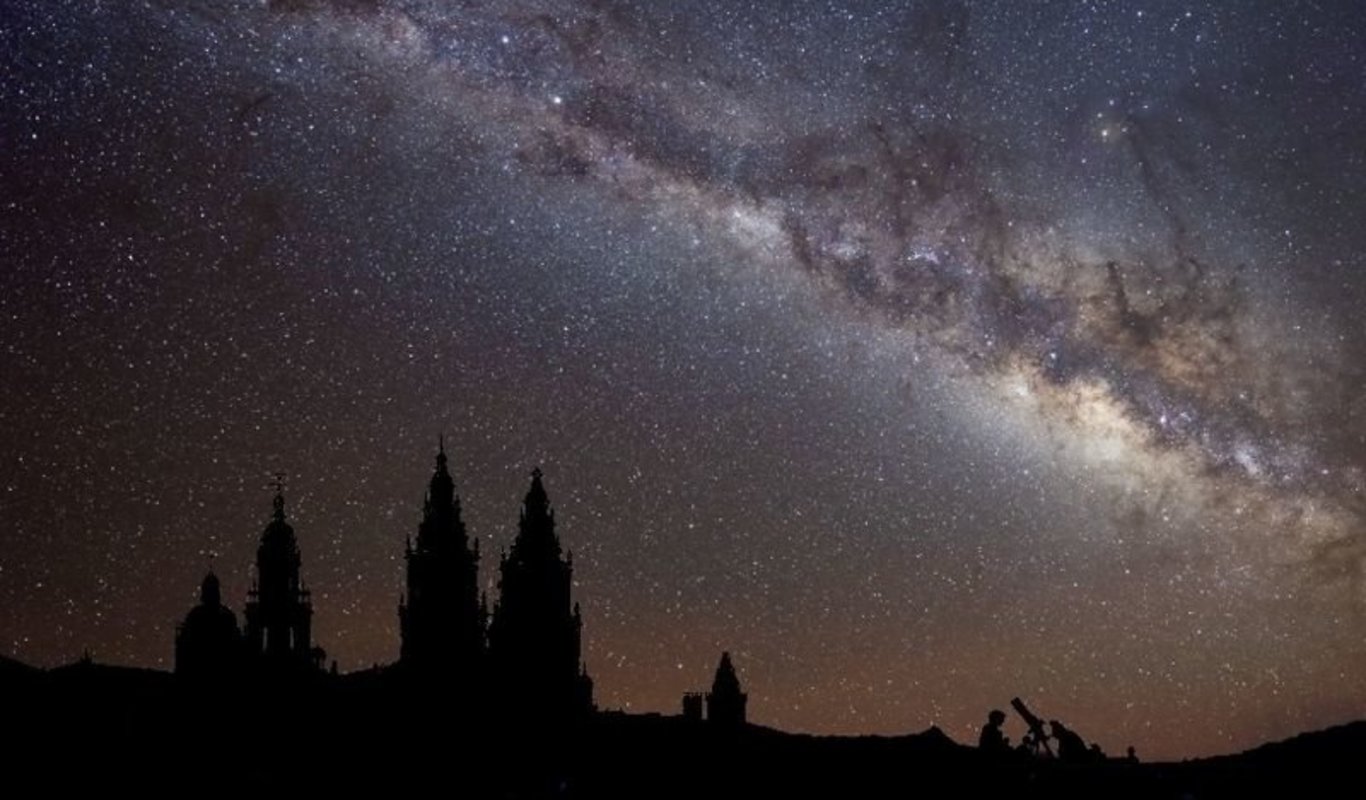 We have already mention that the way to Santiago de Compostela was once known as the way of the starts. Its origin lies beneath the fact that Celts – specifically druids – use to cover this track following a path of starts, from east and west, that the milky way draw on the nighty sky.

The use of this trail began in XII. Its name in Latin is iter stellarumor the way of the stars. The first time that this path appears mention is in the VI Book of the Codex Calixtinus, exactly in the famous literary passage in which the emperor Carlo-Magno is pondering in the open night. The story says: “And suddenly, he saw on the sky a way full of starts which began near the Frisian Sea and, spreading between Germany and Italy, between Galia and Aquitania, passing directly through Gascony, Vasconia, Navarra and Spain towards Galicia, where at that time Santiago’s body was hidden”.

The story says that Carlo-Magno spent many times wondering about the meaning of that way that that night appeared to him on the sky… Until, one night, Santiago appeared to him in his dreams. Santiago explained him that the starry road was the way to his tomb and that he – Carlo Magno – should free him so people from all the nations could pilgrimage to visit him. This “magical” way was not only known in Spain. It was also known in Europe. And everybody knew that that enigmatic white line on the sky, which goal was Compostela, has as its natural ending the end of the world: Fisterra.

Today, that story that one day was written in the Codex Calixtinus, seems to have been brough back to life thanks to the artistic project headed by Estrella Galicia.

Estrella Galicia, a local brewery company located in the city of A Coruña, decided to carry out a project in collaboration with a Galician urban artist whose name is Mon Devane . The main aim of it, as they have already stated in their webpage, was to humanize the way to Santiago by giving back the leading role to an entire society as they have said “to the people that live by and for the way”.

The project is made by murals located in the last stages of the French Way: Triacastela, Sarria, Portomarín, Arzúa, Melide, O Pino and Santiago that portray seven people who live along the way to Santiago and who have helped thousands of pilgrims across the years.

The first mural of this artistic collection is located in the village of Triacastela and it has been dedicated to Xermán Arías. This Galician man went to an unitary school located in the small village of Barbadelo and some years later he is sent to Sarria where he entered in contact with two of his greatest passions: football and music. In 1986, Xermán Arías started to work in a workshop specialized in Galician Instruments founded in 1951 by the luthier Paulino Pérez y collaboration with Antonio Fernández. After learning a lot inside this workshop, the protagonist of this mural took the decision of opening is own workshop in 1993 in Sarria.

The second piece of art located in this way of starts has been dedicated to Mario Mato, a man who was born in Portomarín. After spending his childhood surrounded by nature in his village of Lión, he took the decision of opening a Farm School. Later on, he became closer to the tourism society of Xunta de Galicia, and during the celebration of Xacobeo ’93 he took the decision of orienting his project towards rural tourism.

The next mural, located in Portomarín, has been dedicated to Xose Luís Carrera a Galician man that one day took the decision of moving to the Canary Islands. Once there, he was able to realize that he really misses his own land so he returned and started a project called “Arqueixal”, a sustainable space from the ecological, economical and social point of view. This project that was born in 1990 has been growing and growing without stop since the first day.

The mural has been dedicated to Antón Pombo. He was chosen by Estrella Galicia to become part of this project because in 1984 he decided to complete the way to Santiago with some friends. During this adventure, he met the priest of O Cebreiro who, at that time, was in charge or promoting the renaissance of the Jacobean Pilgrimage. As a result, Antón Pombo takes the decision of writing his PhD on the Compostela church at the end of the XIX century, including the Jacobean rising.

In this case, the mural has been dedicated to Isidro Pardo who being 14 years old began to work in a hydroelectric power station till the day he got retired in 2001. Meanwhile, he got really interested in bees and, as a result, he had a second life as a beekeeper. In 1994, he opens the living museum of honey.

In O Pino, the mural is representing Maruja Varela known among the place as Maruja da Tahona. She was the daughter of two peasants who while being really young moved to Melide in order to work in different houses as a seamstress. Later on, she started to work in a local bakery known as “Casa de la Tahona” sweeting the lives of the inhabitants and pilgrims.

The last stage has been dedicated to the Canadian female writer Laurie Dennet. She was born in Toronto but spends her professional life in London. In 1986 she takes the decision of undertaking the way to Santiago from Chartres (France). In 2010 takes the decision of moving to O Cebreiro and in her garden she creates a replica of the maze located in the Cathedral of Chartres.

Previous articleLinguistic heritage - A unique variety of Greek in Calabria

Next article Thirsty eyes by ‘a petra d’annamuratu – the stone of the man in love in Badolato, Calabria (Italy)