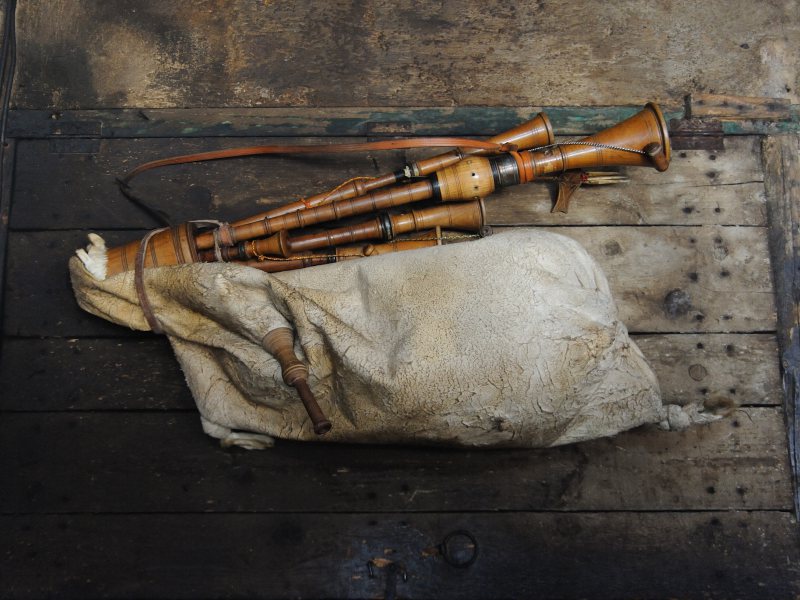 The “Zampogna” is a musical wind instrument that is very widespread in southern Italy, particularly in Calabria, where it is used during village festivals, pilgrimages, folk festivals and on many religious and secular occasions.

Its beautiful melodies, however, are inextricably linked to the Christmas period. During the festive atmosphere of Christmas, it is difficult not to hear the unmistakable sound of Zampogna in the streets of some Calabrian villages.

This instrument derives from the flute of Pan, a well-known mythological figure of goat-like appearance and god of the mountains among the Greeks. In the collective imagination, he symbolises rural life, the patron saint of resting shepherds and herds and a lover of music.

Also known to the Romans as the tibia utricularis, it is now the founder of a family of instruments that are mainly (but not exclusively) widespread in Europe. From the Middle Ages to the modern age, it has diversified into various types, including the Scottish and Irish bagpipes, which are indirectly blown, the French musette and the piva.

“The Zampogna is a sack aerophone with 4-5 reeds that are inserted into a stump where the “Otre (bag for accumulating air) is tied. Only two of the reeds are used for singing to develop the melody, while the others act  as a “bordone” (play a fixed note). The reeds end in reeds which can be single or double, traditionally made of cane (recently also of plastic). The bag for accumulating air (otre) is made from a whole goat or sheep skin (utricle) into which the player injects air through an “insufflator” (reed or bellows) which sets the reeds in vibration, the right one for the melody, the left one for the accompaniment and those of the bordone known as “basso” and “scantillo”.

The Zampogna be accompanied, for example, by the “organetto”, the “chitarra battente” or the “tamburello” (other Calabrian folk music instruments) as well as the flute, and is also used to accompany singing.

Its repertoire consists of pastorals and tarantellas, and it requires considerable physical effort to play well.

It is still one of the most important instruments in the Calabrian agro-pastoral environment.

In fact, since the past centuries, shepherds used to bring their Zampogne with them during the transhumance to cheer themselves up when they were far from home.

The “Zampognari” are central characters in the life of agro-pastoral communities, as they help to ensure the smooth running of small and large collective rituals.

Having long disappeared, they are now making a comeback thanks to renewed interest in popular culture and traditions. Mainly during the Christmas novena, it is traditional for pipers to descend from the mountains into the village to announce the birth of Christ, wandering through the streets and playing here and there in the homes of friends and acquaintances, especially stopping in front of some typical crib traditionally set up for the occasion.

Generally, the “Zampognari” wear clothing that recalls that of the shepherd: it consists of trousers, mountain boots with wool leg warmers, a waistcoat made from the fleece of a goat or a long cloak, a felt hat and a moleskin jacket.

In Calabria, the area in which it has become most widespread and established as a popular instrument is that of the “three Serre” and the villages therein: Spadola, Vallelonga, Serra San Bruno, Brognaturo, etc…

“The figure of the “Zampognaro” has often been the subject of fables, due to his cheerful, festive nature, but also because he is closed off and brusque towards strangers, with whom he is reluctant to share his knowledge, which is passed down orally from father to son for entire generations. The father teaches his son the art of making Zampogne, teaches him how to play the instruments, passes on folk music and rituals and, when the time is right, leaves him the tools and instruments, gives him his place in the trade.  The activity of Zampogna player also becomes a source of livelihood, although not the only one, for families with a long tradition. The services rendered by the players during the festivities are paid for, although in the past it was customary, in the absence of money, to give them basic necessities: cheese, wine and oil’.

Previous articleThe Citron from Calabria, a symbol between sacred and profane

Next article Multiculturalism in street art. Monochromatic murals in Poznań.