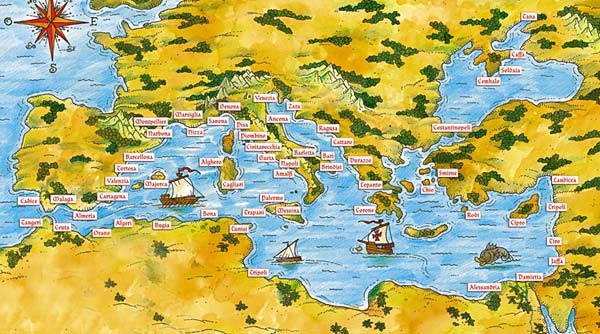 In the famous Strait of Messina, which separates Calabria (peninsular Italy) from the island of Sicily, every day the tidal waves pour enormous quantities of water from the Tyrrhenian Sea to the Ionian Sea and vice versa. The clash of currents gives rise to whirlwinds that have been a real nightmare for sailors since ancient times. The most frightening are those of Scylla and Charybdis, also recounted by Homer in the Odyssey and mentioned by Virgil in the Aeneid. Tidal currents are also mentioned by Dante in the “Divine Comedy”.

“As does the wave there above Charybdis,

which breaks with the one in which it runs,

so it is fitting that people should twist here”.

The waters of the Mediterranean become infernal when misers and prodigals beat their chests and clash insulting each other like the waves above the rocks of Charybdis, in the Strait of Messina, which break clashing with those of Scylla.

Charybdis, in Greek mythology, was a sea monster, daughter of Poseidon and Gaia, which formed a sea vortex, capable of swallowing passing ships. The legend places it near one of the two sides of the Straits of Messina, opposite the lair of the monster Scylla, an octopus with six heads and twelve legs, which snatched sailors from their ships when they approached its lair to avoid the whirlpools of Charybdis.

Today’s Scylla, the pearl of the so-called “Costa Viola”, is a magical place that, during the summer season, welcomes many tourists in search of sun and uncontaminated sea. According to , it was here that the sirens lived, enchanting the sailors with their melodious voices: only the cunning Odysseus managed to listen to them without consequences, after ordering his men to tie him to the mast of his ship. This is why the beach of Scylla is also known as the Beach of the Sirens.

Next article The day of Calabria