Poznań is a perfect place for aesthetes and art lovers. This is a cultural Mecca which attracts thousands of tourists with a diversity of cultural establishments. Among all attractions, the National Museum is a must-visit  place for every culture vulture. First of all, it is one of the largest, oldest and most crucial museums in Poznań. Established in 1857,  this museum is not only a place, where a centuries-old history is stored, but also a source of endless knowledge. The historic building preserve a collection of works of art from the 16th century until now. These paintings were elaborately collected and are a real treasure for connoisseurs. Every visitor has a chance to get acquainted with the art, created by painters from different parts of the world and from various time periods. This museum is a real time machine which send people in the universe of a creative world. 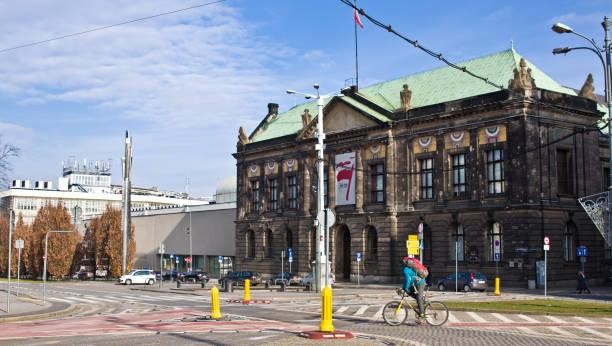 The building was designed by Carl Hinckeldyen and built in 1904.  Until it got its final name this cultural institution was renamed 3 times since the establishment:  the first name was the Museum of Polish and Slavic Antiquities, the second one was Provincial Museum of Posen, the third one – Kaiser-Friedrich-Museum. During the Second World War, numerous collections were destroyed and artworks were looted by the Nazis. Luckily, after the war the Polish government engaged in art restitution and the vast majority of paintings that were plundered during the war  returned to the museum.

Generally, the National Museum has 7 exhibition galleries which houses artworks from various time periods: the Gallery of European Art, the Gallery of Antiquity, The Gallery of the Middle Ages, The Gallery of Polish Art from the 16th to 18th century, the Gallery of Polish art during the period of foreign partitions, the Gallery if Modern Art and the Poster and Graphic design Gallery. Currently, the collections of the museum includes around 300000  art objects. In the museum, visitors can admire the artworks of not only Polish but also of foreign painters. Among Polish artists the paintings by Jan Matejko, Stanisław Wyspiański and Olga Boznańska are displayed. Among foreign artists, visitors can see the artworks by Sofonisba Anguissola, Joos van Cleve or Francesco Bassano.

Next article Poznań Dialect for beginners