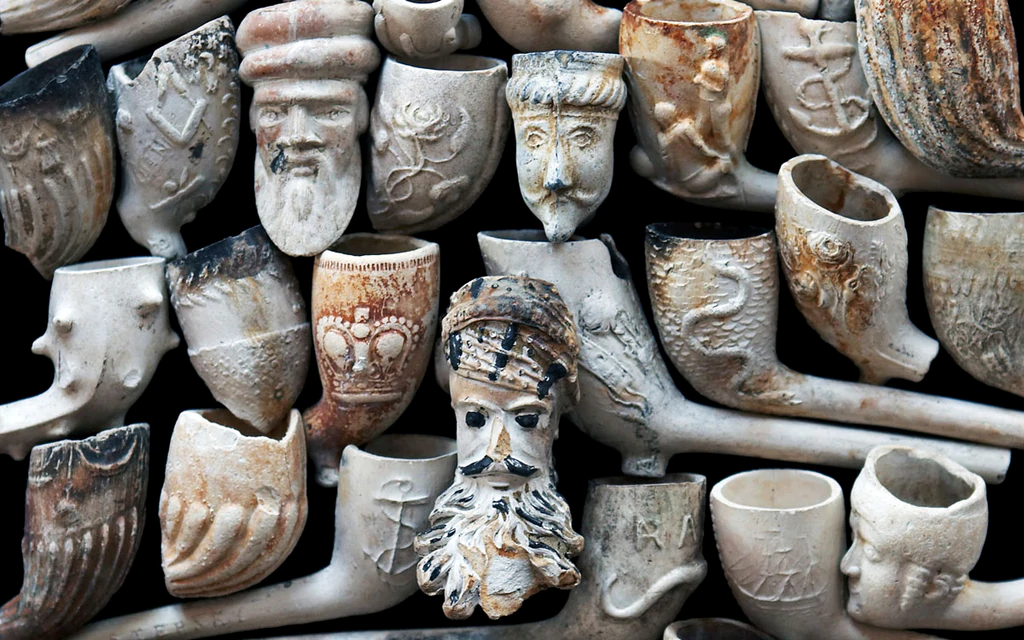 Tobacco was introduced to England during the Tudor period and was first smoked in a clay pipe. Clay tobacco pipe production began about 1580-1585, most likely in London, and expanded throughout the country, sprouting up in the major cities and towns, particularly those with access to sufficient clay. Almost every city, town, and countryside had a clay pipe manufacturer during the following 250 years. With the advent of cigarettes and the increasing popularity of wooden pipes and cigars towards the end of the nineteenth century, just a few clay pipe producers survived into the twentieth century. By 1960, there were just a few remaining producers in England.

Traditional clay pipe-making techniques have been practised since the 1580s. Clays were made, and ‘dummies’ (blanks) were rolled. A wire was placed along the stem, and the dummy was pressed in a two-part, pre-oiled mould. A stopper is then placed to form the bowl, and the wire is pushed through. The surplus clay is removed and the pipe is allowed to cure before final trimming and fire in a kiln. The pipe stem can then be glazed or varnished.

Clay pipes not only chronicle the tale of smoking’s history, but they also represent social and cultural changes. As tobacco became more affordable, pipe bowls grew larger, and pipe styles evolved over time. They are extremely useful to archaeologists and cultural historians since the shapes and styles of the pipes aid to date other artefacts while also illuminating historical occurrences.

Royalty, military events and wars, regiments, politicians, places, pubs, buildings, societies, working men’s clubs, advertising, celebrities, musicians and singers, poets, other famous people, peoples from around the world, story book characters, comedians, clowns, devils, monsters, plants, abstract designs, and many more can be found on pipes from the eighteenth and nineteenth centuries. There were tens of thousands of designs to choose from, and the options were nearly limitless.

Clay pipe manufacturers are documented to have made wig curlers, clay toys, whistles, shooting gallery forms and beads, as well as pipe-clay sculptures and certain tiles between the seventeenth and twentieth centuries. Clay pipes were also well-known for their employment in rituals like as Morris dancing and other rites performed by the Masons, Royal Antediluvian Order of Buffaloes, and others. Another application was as a tool for blowing bubbles, which was popular until the 1950s.

Next article Run for it! A half marathon through the districts of Poznań